March is Women’s History Month, following on the heels of Black History Month.  They both are interconnected. Women the world over have the right to sexual and reproductive health care, regardless of their race, ethnicity, location, economic status, or any other barrier or reason to deny them that care.

Few of us grandmothers were taught anything about women’s history.  We learned about political events and wars, and almost nothing on women’s contributions to the world. There were few women’s studies programs in colleges and universities.  Female elected officials were extremely rare. Medical researchers based their work on men and assumed that women were the same.

Attention to women’s medical needs was most often ignored or even resisted. No 20th-century public health achievement demonstrates this more clearly than the struggle to provide women in the United States with safe and effective birth control. Margaret Sanger’s story, in which she risked scandal, danger, and imprisonment, is a perfect example. Thanks to The Comstock Law of 1873, it was a crime to sell or distribute materials that could be used for contraception or abortion, to send such materials or related information in the U.S. mail, or to import such materials 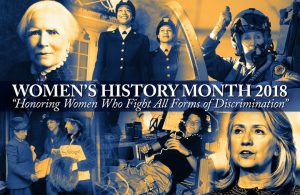 But now, thanks to increased availability of contraception and women’s ability to regulate their fertility, women have been able to surpass men in higher education degrees, and we’ve made strides with our representation in the workforce.  And the traditional patriarchy is being shaken.

Millions of women marched on January 21, 2017; millions more since.  Women are running for political office in far greater numbers. Women are testifying at legislative hearings, contacting their legislators, speaking out at political town halls.  Yes, the pushback to our activism is strong. We’ve gotten under conservatives’ skin.

We will raise our voices around  #MeToo and sexual abuse. We will hold our government officials accountable. We will exercise our power at the polls.  WE WILL PERSIST.

We will fight forward to change the course of history.  We will celebrate with women across the world!