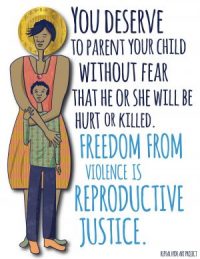 The reproductive justice framework holds three tenets at its core. Every woman has the human right to:

1.Decide if and when she will have a baby and the conditions under which she will give birth,

2. Decide if she will not have a baby and her options for preventing or ending a pregnancy, and

3. Parent the children she already has with the necessary social supports in safe environments and healthy communities and without fear of violence from individuals or the government.

Ahmaud Arbery, 25, was killed on February 23 in a Georgia neighborhood. No one had been arrested or charged in the case, prompting an outcry from the local NAACP and others. Arbery was black and the men who chased him are white.

Ahmaud's father, Marcus Arbery, said in a statement, "All I want to do is get justice for my son. “This is terrible. It could happen to anybody’s kid.”  It could be anybody's kid, but it is far more likely that to be a Black/African American kid.

According to Pew Research, about two-thirds of Americans say that blacks are treated less fairly than whites in dealing with the police (67%) and by the criminal justice system (65%).

Do you know your candidates' position (local, state, federal) on racial justice, and do they have a plan to address it?

It's time we start asking!