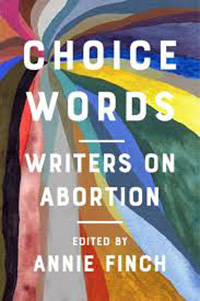 A landmark literary anthology of poems, stories, and essays, Choice Words collects essential voices that renew our courage in the struggle to defend reproductive rights. Twenty years in the making, the book spans continents and centuries. It is a book I enthusiastically recommend. The writings, by over 130 writers from around the world and from many ages—the earliest written about 1549—cover many different experiences of and reflections on abortion.

The book is divided into five sections - Mind, Body, Heart, Will, and Spirit—though it wasn’t always clear to me why a piece was in a particular section. Other pieces, however, clearly belonged in the selected category. "A Birth Plan for Dying", by Hanna Neuschwander, is deeply spiritual, while "Psalm" by Alina Stefanescu, despite its title clearly refers to the bodily experience:

“For the crochet hook and the knitting needle …
For the raspberry leaf and the shining nettle, boiled across centuries …
For the pliable metal coat hangers ..."

In poetry and prose, fictional narratives and deeply personal accounts, there is pain and there is joy; there is much love and in some the antagonism of abortion’s opponents, of whom Ulrica Hume, in "Lizard", wonders “if their sixth commandment applied to war as well, or just to those who die who are not yet born.”

Some pieces are quite long—"The Scarlet A" runs to 16 pages—while the shortest is a verse by Joanna C. Valente, "The Pill versus the Springfield Mine Disaster":

“Don’t blame me. I only killed
What I could not take care
Of.”

While many of the pieces describe the heartbreak and anguish of not bearing a child, for some, such as the women of Eastern Europe for whom “the medical removal of a fertilized egg was no more traumatic or shameful than the pharmaceutical prevention of the egg’s fertilization. Like menstruation and menopause, abortion was just part of a woman’s life cycle.” Before the culture wars, many American women of the 1970s felt much the same way, Julia Conrad reveals in "Cold Cuts and Connections".

Sylvia Ramos Cruz, in "This Doctor speaks: Abortion is Health Care", navigates the maze of laws conceived by scores of part-time legislators who know little about the science, ritual, and real-life consequences of practicing medicine before practicing what she loves—administering a range of women’s healthcare needs, including abortion.

Sonia Kamal, in "The Scarlet A", comprehends “the gulf between the crimes of a man and the crimes of a woman." "For the first time, it struck me that while Ohman was probably sitting in his room watching a movie, I was about to undergo something potentially fatal.”

Equally reflecting the difference between male and female views is Jennifer Reeser, writing of something told her by her Native American grandfather: The shamans … call it “murder medicine” …. The midwives murmur, “Swallow Shepherd’s purse.”

Whether you choose to dip into it, selecting here and there or read from beginning to end, Choice Words contains boundless wisdom and insights for us all.