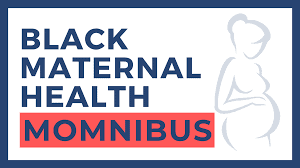 You’ve heard GRR! speak before about our support for the Black Maternal Health Momnibus Act. Momnibus is a package of bills introduced in Congress that would take concrete actions to address the horrific maternal mortality crisis in the United States that disproportionately impacts Black women.

During Black Maternal Mental Health Week, we’d like to focus on the Moms Matter Act.  The Act specifically addresses mental health for birthing people during the perinatal period (immediately before and after birth).

First, it is critical to consider the current state of mental health for Black birthing people in the United States. According to research cited by Kaiser Health News, low-income mothers and women of color are “several times more likely to suffer from postpartum mental illness but less likely to receive treatment than other mothers.” “Contributing factors include:

• assessment tools for postpartum depression and anxiety disorders that were developed using majority or only white research subjects;

• the increased stigma of mental illness towards Black women; and,

• legitimate and significant fear of involvement from the ‘child protective system’—also known as the family regulation system.”

One Black mother quoted in the Kaiser article shares her fears, saying, “You’re afraid to say it because you think the next step is [for the authorities] to take your children away from you,” she said. “You’re young, and you’re African American, so it’s like [people are thinking], ‘She’s going to be a bad mom.’

The Moms Matter Act is sponsored by Representative Lisa Blunt Rochester and Senator Kirsten Gillibrand and was reintroduced in February. According to resources created by the Black Maternal Health Caucus, the bill “will make investments in programs to support moms with maternal mental health conditions and substance use disorders. It also provides funding to grow and diversify the maternal mental and behavioral health care workforce.”

The Act’s programs would fund include group prenatal and postpartum care models, collaborative maternity care models, awareness-raising initiatives to educate communities on warning signs for maternal mental and behavioral health conditions, and suicide prevention programs. The bill also acknowledges substance use issues in driving up risks and rates for fatal overdose during the postpartum year. Take action today to support the Moms Matter Act by contacting your members of Congress.

GRR! supports all bills in the Momnibus Act. We also know that policy change alone will not end the crisis Black birthing people in America face. We also need medical providers and birth workers to invest deeply in education and action to eradicate racism from perinatal care.

There is also a growing movement to establish birth centers in Black communities and grow the workforce of Black midwives, nurses, and OBGYNS.

We believe when we build a culture of birth that centers on the well-being of Black birthing people—especially those who are low-income—we will truly end the perinatal mortality crisis, and all birthing people will benefit.