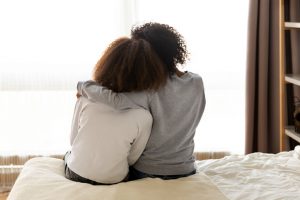 My daughter had an abortion. She was 19 and in an abusive relationship. She says now that she was very out of tune with her body at the time and didn’t even realize that she was pregnant until she went to a health center for birth control.

Ronnie and his parents wanted to keep the baby, and they told Ronnie and Madeleine they should move in with them. Ronnie’s family is religiously conservative. Ronnie was very controlling, and Madeleine knew he was trying to mess with her birth control (hiding it, maybe substituting other pills in it). He was afraid Madeleine would leave him and saw a baby as a means to keep them together. There were also drugs involved, and my husband and I had been deeply concerned for some time.

Madeleine and I have always been close, and when she started having so many troubles as a teen, I heard way more than I wanted to about what was going on! But I never shut her off and kept the lines of communication open. I listened as she struggled with her decision.

She knew she wasn’t ready to have a child, and she knew she wasn’t happy in the relationship. She looked at Ronnie’s family and saw them always bickering and in each other’s business. He and his family harassed her terribly and called her a c*** and other awful things while she tried to sort out what to do. Planned Parenthood gave her all the information she needed to make her decision without bias. She made the decision to end the pregnancy. Shortly after that, she changed her cell phone number and fled the state to get out of Ronnie’s control. He stalked her, but she was now out of his reach.

Madeleine is thriving today. She’s a nurse practitioner, solving problems and working to make other people’s lives better in every way she can. I’m so proud of her and more determined than ever to fight for bodily autonomy and Reproductive Justice for these and future generations.