Donna’s Story: Why I am a GRR! 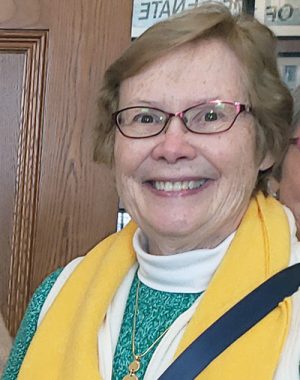 When I moved to Maine with my husband, I was newly-retired. I had spent my life as a psychiatric nurse, helping others with their problems. Now I had a problem of my own…how to stay active and useful in my “twilight years.” When I learned from a dear friend that a few women were forming a group, Grandmothers for Reproductive Rights, I was intrigued. Little did I know that it would grow into a national organization in only seven short years.

I was amazed that age could be used as a positive force to help younger women to know what life had been like before Roe v. Wade, and to push for legislation for reproductive justice. I had worked for women’s rights in the past, as I marched for the ERA and Geraldine Ferraro, as Walter Mondale’s Vice-Presidential candidate.

GRR! was different. It was about a generation who had been deeply affected by life before Roe v. Wade. We grandmothers knew what life had been like before that Supreme Court decision. We had known friends and relatives who had died, or nearly so, from abortions by unskilled practitioners and, sometimes, by their own hands. The stories were tragic and quite sad.

So, we GRR!s developed a curriculum that laid out the story of what women were forced to do if they did not want to have a child before Roe. We included our own stories and stories of those we knew. I worked with this group to develop the curriculum, which we then took to Maine colleges and universities. It has been so exciting to see students, male and female, amazed by our history. I now feel that growing old has its advantages. Sharing our stories inspires young people to protect their reproductive rights, health, and justice.

We also advocate for women’s reproductive rights. One of our founding members became a Maine State Representative. We attend legislative meetings and testify on critical issues related to women’s reproductive rights. It is fun to go to the State House, where we are well-known and welcome. Legislators appreciate our stamina, passion, and knowledge even when they may disagree with particular points of view.

Over the past seven years, I learned that there is nothing like working with a group of women for a common cause … raucous, refreshing, and rewarding!

I am happy to be part of this knowledgeable and dedicated group of “women of a certain age.”